The Hidden Powers of Functional Mushrooms 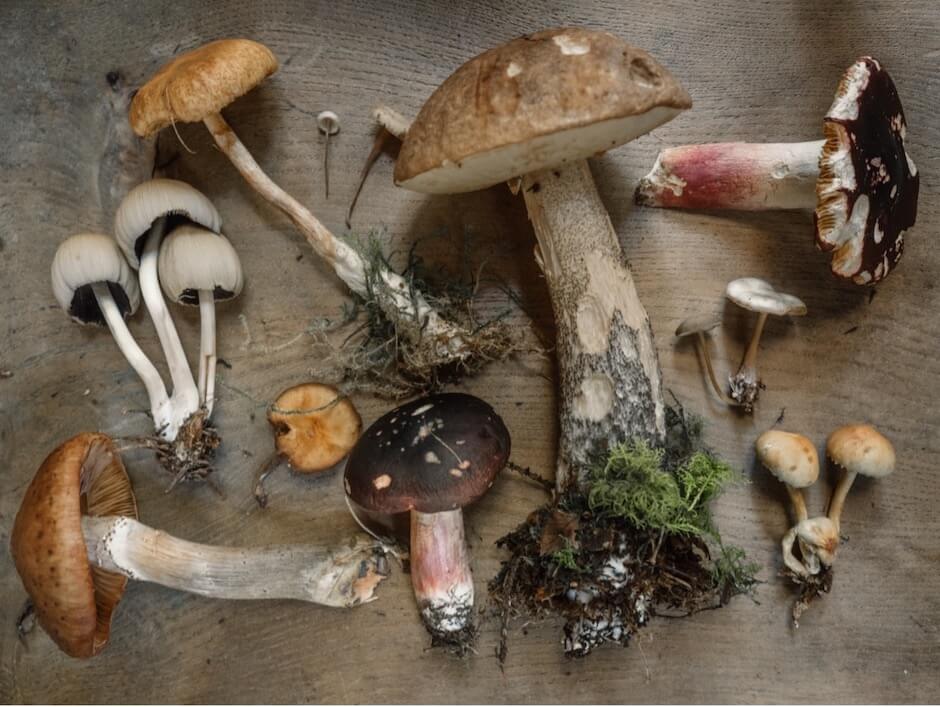 When we think about mushrooms we don’t necessarily think of a powerful medicine; we may think of an oddly textured spongy thing that smells like dirt. You might have seen mushroom lattes or coffee alternatives that use blends of fungi to enhance your health through your daily ritual. It’s not just a fad, there’s truth to this upcoming trend; these strange named mushrooms have potent health benefits and can easily be incorporated into daily life.

What Makes a Mushroom Functional?

Mushrooms are considered a “superfood” and have been a staple in many cultures especially in China for centuries. They play such a vital role in healing and general wellness they are considered ‘functional or medicinal’ mushrooms.

Some common functional mushrooms touted for these benefits are reishi, shiitake, maitake, and cordyceps. Consuming these fungi can help provide longevity, energy, and immunity.

You’ve probably heard of chaga and lion’s mane, because there is more research done on these particularly more recently in the western world. Researchers are investigating into the antiviral and anti-inflammatory properties to help combat many of the largest health concerns like; cancer, diabetes, and auto-immune diseases. So far there has been great results in the healing benefits such as inhibiting cancer cell growth, balancing hormones, and reducing chronic fatigue.

Let’s Get Acquainted with the Structure of a Mushroom

Let’s get to know these small power houses. Understanding the structure of the mushroom helps when it comes to shopping for the right product. All fungi have similar structures all consisting of a mycelium (essentially roots), and a fruiting body that includes the stem, cap, and spores. So, what does each part do?

Mycelium reaches out like a fishing net under the ground penetrating the root systems of plants and trees. The strength of mycelium and the surrounding plants create a mutually beneficial relationship. The mycelium absorbs water and nutrients from the surrounding environment and then transfers energy to the plants to grow and thrive. Because this complex root system has enzymes that can break down the decay of plants and trees, this fuels the mycelium to grow the fruiting body of the mushroom.

Mycelium also is considered the “original internet” swapping helpful information about intruders and pathogens, while creating a fungal defense system to protect.

The fruiting body is the aboveground part we see and refer to as the ‘mushroom’. Often, it’s edible along with the stem. Just like any other species, these bodies come in all shapes and sizes.

When looking for mushroom supplements, read the ingredient label to ensure you’re getting the fruiting body because it’s the most potent part to humans.

Have you ever bumped a mushroom with your foot and a fine ‘dust’ puffs into the air? That dust is called spores, which is essentially fungal seeds! These seeds or spores are released from the gills or pores under the cap. Each mushroom can produce thousands up to trillions -depending on their size – a day.

The number of spores produces by one puff ball mushroom could circle the earth at the equator! Surprisingly, only a fraction of the spores will germinate.

Spores are made up of some of the hardest substance on the planet called chitin.

Spores are the fastest live organisms on earth. Although the rate is short distance, some mushroom spores are released at the astonishing rate of 20,000 G’s of force.

Some studies have found fruiting bodies can release spores at 180,000 G’s! To give you some perspective, a fighter pilot, who is highly trained to be able to handle high amounts of force can only withstand roughly 5 to 9 G’s! 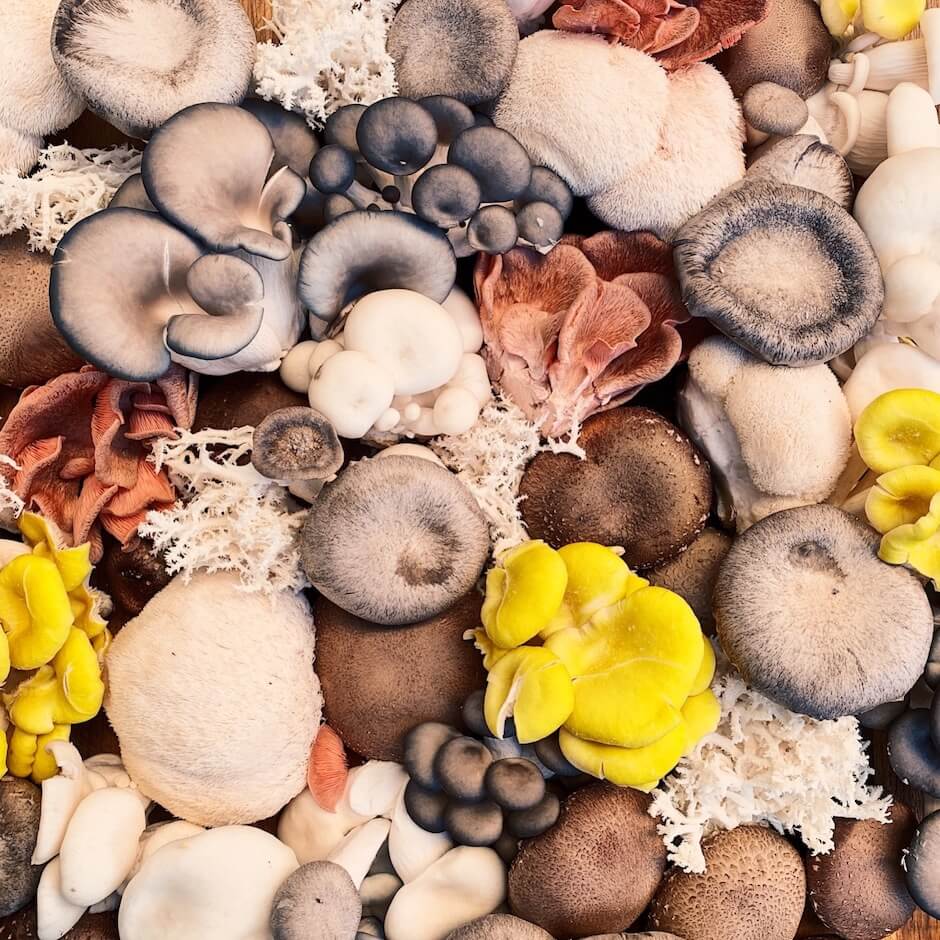 The Main Benefits of Functional Mushrooms

Why should we consider utilizing mushrooms for our health? You’ll be amazed at the list of nourishing properties. While varieties differ; mushrooms all come fully loaded with vital nutrients with some hard-to-get minerals and vitamins. Nutrients such as copper, vitamin D, biotin, pantothenic acids, selenium, and riboflavin.

Considering that proper Vitamin D is attributed to improved cardiovascular health, hormone regulation, and an elevated mood. Did you know that a whopping 50-75% of Americans are Vitamin D deficient?

Biotin or Vitamin B is crucial to supporting skin, nervous system, and digestion. Along with it’s cousin, pantothenic acid, aka Vitamin B6, also prescribed for anti-inflammatory issues like arthritis and PMS.

Mushrooms contain adaptogens which is a naturally occurring nontoxic substances that protect the body from stress by stabilizing and optimizing its physiological functions.

Lots of plants and mushrooms have adaptogens. Mushrooms will adapt their healing powers based on whatever the body is specifically needing at that given time to restore peak functionality. Other plants that are well known for this ability: are ginseng root, holy basil, cordyceps and reishi. Adding in adaptogens especially functional mushrooms, is a great way to help restore balance and provide support.

The shiitake has a different polysaccharide that’s proven to be more aggressive at targeting HIV infected cells than the widely used treatment pharmaceutical on the market. It also stimulates antibodies that counteract the effects of Hepatitis B. Fun fact; that most medicinal mushrooms activate the generation of cells that kill foreign pathogens.

A specific part of these unique carbohydrates that aids in immune regulating is the beta-glucans. These wonderous carbs are best known for their ability to reduce cancerous cells. Which is great news because when cancerous cells fill the body the immune system tends to overreact in its response. Which is why it’s good to have a regulated immune system on your side that allows it to fight off disease.

Hard to Find Nutrients in a Concentrated Form

It would be great if our bodies naturally made these compounds, but like many other nutrients needed, they must be consumed.

The best source for beta-glucans is through mushrooms and especially in the extract form. Extracts allow for high concentrations providing optimal forms that are easily absorbed. Since all mushrooms are not the same nor are their beta-glucan strains.

Each different strain is unique and has different healing properties. Some are known to help with asthma symptoms; others can reduce the effects of heart disease. Regardless all these have the ability to restore and encourage healthy immune function.

As you can tell, the world of functional mushrooms has a large capacity to promote health naturally! The unique the power of each mushroom holds vast opportunities when it comes to their healing properties, and we are still learning more about how and when we can utilize them!

Out next blog, we’ll cover certain considerations before diving into the world of mushrooms! We’ll walk you through; what’s the best for your money, what to look for on the ingredient label when purchasing, highly rated companies who test for highest quality; as well as fun recipes to incorporate more mushrooms in your everyday routine. Stay tuned!